Every person you know – personally and professionally – wants to be liked and approved of. Even the people in your organization who you think are lazy, want you to think highly of them. And when anyone calls another person’s competence into question, that person is likely to freak out (become defensive). 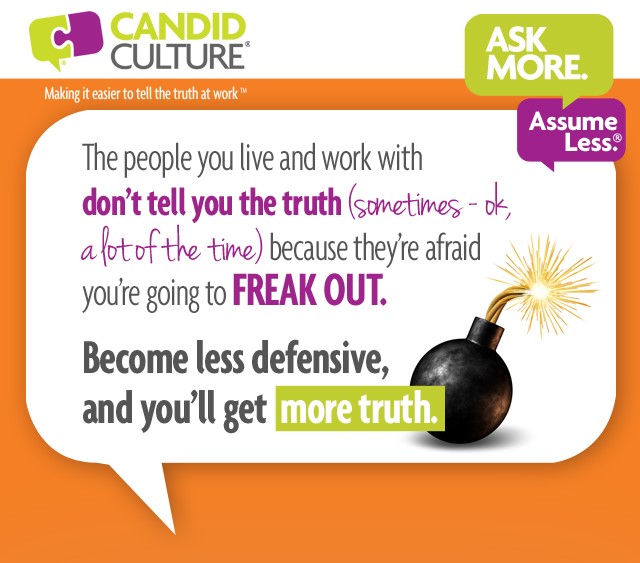 2.  Be specific about the type of feedback you want.

3.  Tell the person from whom you’re asking for feedback when and where she can observe you in action.

4. When you receive feedback, say, “Thank you for telling me. I’m going to think about what you’ve said and may come back to you in a few days to talk more.”

5.  Don’t respond to negative feedback immediately. Walk away instead of responding.

6.  If you’d like more information or want to tell the person you disagree with what they said, wait until you’re calm to have that conversation. That can be minutes or a few days later.

7. You can express a counterpoint of view, just don’t do it immediately after receiving feedback. Anything you say in the moment will likely sound defensive.

No matter what a person’s role in your life – your boss, a peer, external customer, or even spouse – it takes courage to give you feedback. When a conversation requires courage, the speaker’s emotions are heightened. If the feedback recipient’s emotions rise in response to the feedback, conversations escalate. This is how arguments start. If you want to put the other person at ease and get more feedback in the future, do the opposite of what people are expecting. Rather than getting even the slightest bit defensive, do the opposite. Say, “Thank you for the feedback. I’m sorry you had that experience. I’m going to think about what you’ve said and may come back to you to talk more.” Then walk away.

Walking away, when all you want to do is react, is very difficult. Walking away will require a good deal of self-control, but the rewards are great. You will build trust, strengthen relationships, and get more information than you have in the past – information you need to manage your career, reputation, and business.

One Response to “How to Respond to Negative Feedback”