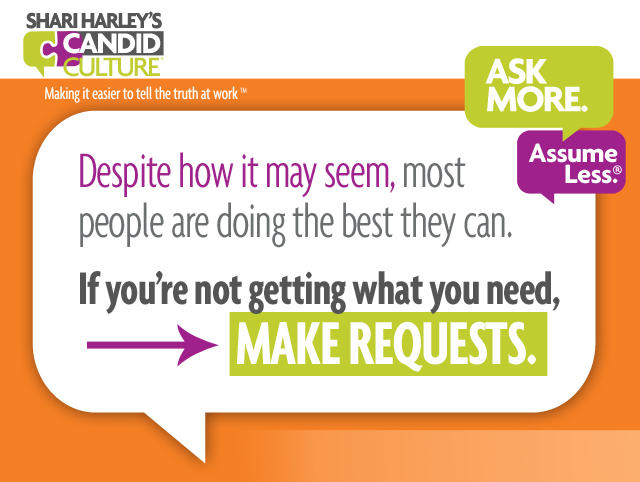 I’ll never forget a coaching meeting I had about two years ago. I gave the manager I was coaching some tough feedback and he replied by saying, “I know I do that.” So I asked him, “If you know this is an issue, why are we having the discussion? He told me, “I just figured this is the way I am.” And I realized that knowing a behavior is ineffective doesn’t mean we know what to do to make things better.

The people you work with want to do a good job. They want you to think well of them. Yes, even the people you think do little work and/or are out to get you. Give people the benefit of the doubt. Assume people are doing the best they know how to do. And when you don’t get what you want, make requests.

You are always dealing with people’s egos. And when egos get bruised, defenses rise. When defenses rise, it’s hard to have a good conversation. People stop listening and start defending themselves. Defending oneself is a normal and natural reaction to negative feedback. It’s a survival instinct.

I will admit, asking for what you want in a neutral and non-judgmental way when you’re frustrated is very hard to do. The antidote is to anticipate your needs and ask for what you want at the onset of anything new. And when things go awry, wait until you’re not upset to make a request. If you are critical, apologize and promise to do better next time. It’s all trial and error. And luckily, because most of us aren’t great at setting expectations and human beings are human and make mistakes, you’ll have lots and lots of chances to practice giving feedback and making requests.