How many times have you been sitting at your desk wondering, “Why won’t they ___________ ?” Perplexed, you talk with your buddy at work. The conversation goes something like, “I’ve got this person, and I can’t figure out why they won’t ______________.” Or perhaps you talked directly to the person, but after several conversations, they still haven’t done what you asked them to do.

There are four reasons why people don’t do what you ask them to do:

Reason number one for a lack of employee performance, they don’t know-how, is the easiest to solve. People who don’t know how to do something need training, coaching, a mentor, a job aid or some other form of instruction. The hope is that with the right training and exposure, they will be able to do what you’re asking.

Reason number two for a lack of employee performance, they don’t think they know how, can be improved over time with patience and consistent coaching. You aren’t working with clean slates. Most people are recovering from or reacting to a past relationship or situation. If a person worked for a controlling manager who never let them make a decision or worked for someone who invoked punitive consequences for making mistakes, the person will likely be hesitant to make decisions. Hence why they continue to ask questions and repeatedly check in, but never make a decision independently.

If you work with someone who doesn’t think they know what to do, but you know they have the answer, encourage them to trust themself. When they come to you for validation or approval, ask questions, don’t give answers. Tell the person you trust their judgment and encourage risk-taking. Tell them you’ll support their decision, even if it proves to be the wrong one. And encourage them to make a decision next time without consulting you. Then keep your word. If they make a wrong call, you have to have their back and can’t invoke negative consequences.

Reason number three for a lack of employee performance, they can’t, is challenging but clear-cut. People who can’t do a task their brains aren’t wired for, will never do that responsibility well, regardless of how much coaching, training, and assistance you provide. If you have repeatedly and effectively, coached, trained, and provided support and the person still can’t do what is being asked, remove that responsibility and give the person something they can do well. If that responsibility is a large part of the job, you have someone in the wrong job. It’s time to make a change.

Reason number four for a lack of employee performance, they don’t want to, is annoying but manageable. There are lots of reasons people don’t do things they don’t want to do. Those reasons include, but aren’t limited to, boredom, lack of buy-in as to why something is important, insufficient time, feeling like a task is beneath them, etc. If you’ve got someone who can but doesn’t want to do something, you can either take the responsibility away, incent them to do it, or give feedback EVERY TIME the task doesn’t get done.

Giving negative feedback isn’t fun for the giver or the receiver. No one wants to hear that they aren’t meeting expectations and most people don’t want to tell you. But the discomfort of receiving negative feedback EVERY TIME the person doesn’t do what they need to do will create behavior change. They will either begin doing what you ask, quit, or ask for a transfer. Either way, your problem is solved.

The first step in getting people to do what you want them to do is to discover why they’re not doing what you ask. It’s impossible to appropriately manage employee performance if you don’t know why someone isn’t doing what needs to do be done. And the person to ask why a responsibility isn’t getting done isn’t you or your buddy, it’s the person not doing the work. So, get out of your head, leave your office or laptop, and go talk to the person not doing the work.

Here’s how to start an employee performance conversation:

“I’ve noticed you’re not doing ___________. Help me understand what’s happening.” Watch your tone, inquire from a place of genuine curiosity, and identify the reason they aren’t doing what they need to do. Then you can intervene appropriately and hopefully get what you want.

Last week we had movers in our warehouse moving products in and out of storage. The movers charged by the hour. Shortly after they arrived, I noticed one of the movers on his phone. Then I noticed another on his phone. I didn’t say anything. The phone use continued. So, I politely asked the two movers to only use their phones when they were on a break. And then I felt badly about saying something and spent the rest of the day apologizing. I didn’t want them to think I was ‘mean’.

I know it was ok to hold them accountable. I was paying a lot of money for their time. It was completely reasonable to expect them to be working. But I want to be liked and approved of (yes, even by the movers who I’ll never see again).

Every time I apologized or sought to justify my message, my communication lost power. Why say anything if I’m going to spend the day regretting and retracting my message?

After the experience with the movers, I realized how often I apologize for making requests, even perfectly legitimate and modest requests. And I’m wondering why I do this? Are we taught it’s not ok to ask for things? 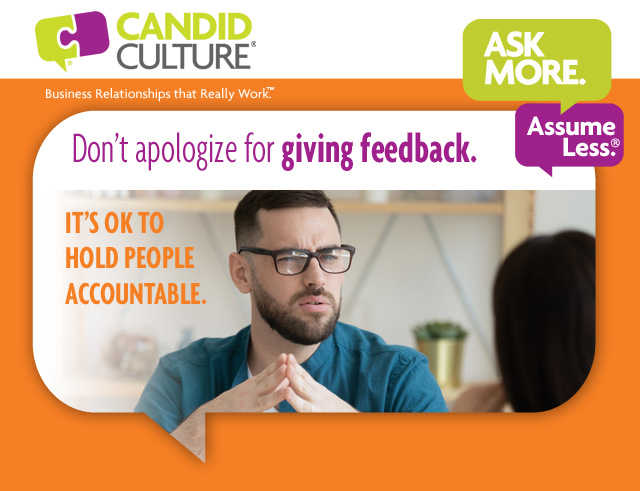 Making requests is a subtle form of giving feedback. It’s less direct than what I call the “tell method.”

It’s ok to have expectations. It’s ok to make requests. And it’s ok to hold people accountable.  I know this. You know this. And yet, I see how often I and others apologize for making requests and giving feedback. I feel like we need a regular pep talk – a little bird whispering in our ear each time we ask someone to do what we hired them to do. “It’s ok to ask. You aren’t mean. It’s ok to hold people accountable. If people don’t want to do the work they agreed to or can’t accept feedback, they’re not the right people.”

I’ll just keep giving myself that pep talk, because it’s ok to ask and not feel badly about it.

Give Feedback Without Freaking Out – Good Business Communication

Last week I was upset, really upset. I worked hard to practice what I preach when giving feedback – wait to talk until I’m calm, ask questions, and no matter what happens, don’t send a text message. It was hard, really hard.

I was mad and wanted to say, “What the *&^#$@?” But I know that when people receive negative feedback they feel judged. And when people feel judged, they become defensive, making it very difficult to hear what the other person is saying and have a conversation.

When my emotions don’t get the best of me, I plan hard conversations by asking myself these questions:

Knowing that if I want to have a good conversation, I need to reduce the other person’s defensiveness, I often start feedback conversations by asking the neutral question, “Help me understand; what happened the other day?”

Last week one of my employees tipped me off that the people who work for me are on to me. They’ve read my book. When I ask, “Help me understand; what happened the other day,” they know that feedback will follow.

You don’t want to approach your relationships and conversations in a formulaic and inauthentic way. Inauthenticity stinks and it can damage relationships more than freaking out will do. But it’s not a terrible thing to put someone on notice. If the people who work with me know that negative feedback follows the question “what happened,” they know the conversation is important. Yes, they’ve been tipped off and perhaps as a result they’re on the defensive, but I still think asking “what happened yesterday” is a heck of a lot better than raising your voice, accusing, and asking questions later.

Asking questions to discuss thwarted expectations is hard to practice. It takes great self-management, which I don’t always have. I mostly practice what I teach, and when I don’t, I clean up the mess I’ve made, apologize and recommit to doing so in the future. And you can do the same.

A Few Practices to Consider: 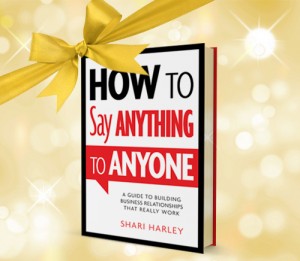 And when you find that you’ve put the other person on the defensive and s/he feels judged, work to do better next time. But in the end, speaking up is always better than stuffing how you feel, even if you handle the conversations differently than you had planned.