Fix Relationships When Nothing Is Wrong

Last week I was chased down in the hallway by a conference participant. She told me that she and her husband bickered about (his) driving all the way to the conference. After three hours of bickering, she knew she needed to discuss how to handle driving disagreements in the future, and asked me how. I told her, “The time to fix a relationship, is when there is nothing wrong.” 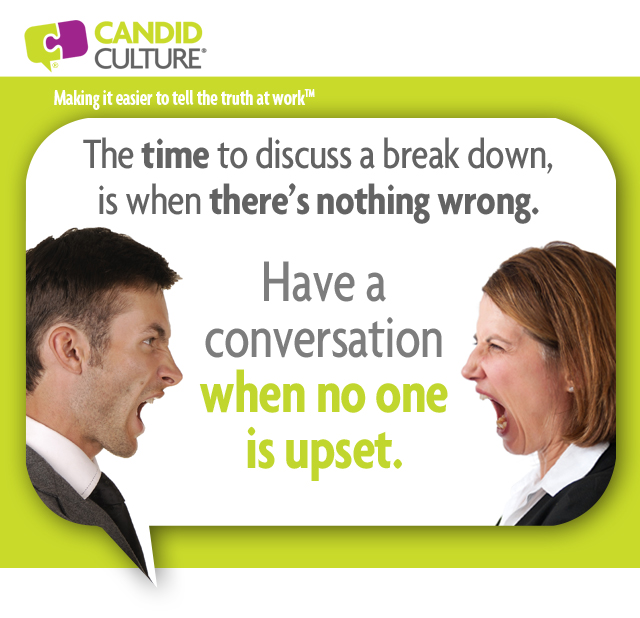 Talking with another person when you’re upset, often leads to more upset. Emotions and conversations escalate quickly. The more upset you are, the more likely you are to say things you’ll regret. The time to alter how you work, live, and communicate with someone, is when there is nothing wrong.

Pick a time when things are calm and when no one is upset. Tell the other person that you want to talk about how you work together, manage disagreements, make decisions, handle disappointments, etc.  Share what you have observed in the past and make requests. Brainstorm solutions together. You’ll have a much better conversation when you’ve had time to calm down from whatever happened to create the need for the conversation.

Waiting to have a conversation until you’re not upset creates the risk of waiting too long to address concerns. The right time to talk about a breakdown is as soon after an event as you can. When both people are calm and have time to have the conversation, usually within a few days of a challenge.

There is no talking to my two-year old about why I took away a toy when I do it. He’s too upset. I need to wait to talk to him about why I did what I did and what I want him to do next time, when he’s calm. Typically, that’s later the same day. Adults may take a little longer. But this isn’t a pass to wait six weeks, which is what we often do. The conversation won’t be as hard or as bad as you think, if you talk when you’re calm and speak from what the relationship needs.

Speaking from what the relationship needs is saying just what you need to, not more and not less, to resolve the challenge and create a better way to handle things in the future. And communicating in a kind and direct way, so the other person can take in what you have to say.

Men get a bad rap for going to the man-cave and coming out to talk when they’re ready. This has a lot of wisdom. Don’t talk if you’re not ready.

Agree upon better ways for handing challenges when no one is upset. Speaking directly, calmly, caringly and with the desire to make things work, typically has a positive result. 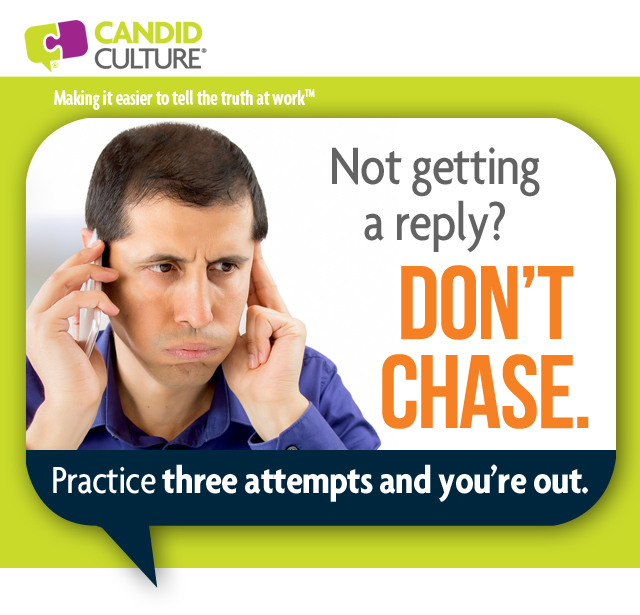 If you work with other people, there is likely at least one business relationship you wish was stronger. If only that person included you on necessary communications, didn’t gossip about you, or gave you honest feedback versus telling you everything is fine and then working around you.

What often makes work hard isn’t the work at hand, but the people we work with – the power struggles, cc-reply-to-all when everyone doesn’t need to know, and the gossip that pervades most organizations.

You need to communicate and work well with the people you work with regularly. And like any relationship, business relationships require work. But what happens when someone doesn’t return your efforts for a positive working relationship? S/he doesn’t return emails or voicemails, ignores requests, and/or goes above you instead of coming to you when issues arise?

The conversation could go something like, “We’re going to be working together a lot this quarter, I thought it would be helpful to talk through how we both like to communicate and who will do what. When is a good time to spend a few minutes to discuss?”

Or, you could say, “Lots has happened in the past year – good and bad. I thought it would be helpful to talk about what did and didn’t work this year, so next year can be smooth. Would you be interested in having that conversation?”

Or, perhaps, “I want to talk with you about how we work together. I think we both know that this past year was hard. I’d love for us to have a good working relationship. Would you be willing to have lunch with me to discuss how we want to work together next year?”

It doesn’t so much matter what you say, as long as you start the conversation. Relationships don’t just improve by chance.

I’ll make attempts like those above three times (with the same person). If the person doesn’t reach back, says no, or cancels three scheduled meetings, I give up. Don’t chase people. The people who are interested in fostering a good working relationship with you will make the time and be willing to be uncomfortable.

What does it mean to give up? You are not the Golden Retriever of the workplace. Nor are you the 7-11 – always open. If someone isn’t interested in talking with me about how we can improve our relationship, I don’t keep asking. After the third no, I’m polite. I include the person in all necessary meetings and communications. I’m professional. But I don’t keep inviting. You can’t work with someone who won’t work with you.

Extend an olive branch. Be forthcoming, brave, and yourself. And if you get three nos’, go to lunch with someone else.