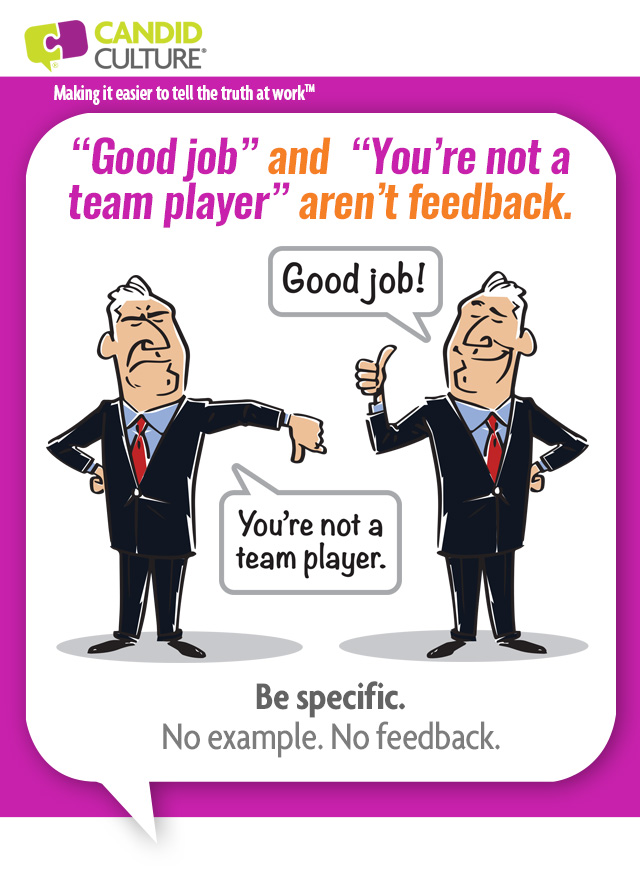 Want to know why people get defensive when you give feedback and why they often don’t change their behavior? Because what you’re giving them isn’t actually feedback.

“You’re awesome to work with” isn’t feedback. Neither is “You did a great job.” “Your work isn’t thorough” isn’t either. Neither is, “You were inappropriate.”

Most of what we consider feedback isn’t feedback at all. It’s vague, unhelpful language that leaves people wondering what they need to do more, better, or differently.

There are only two reasons to give feedback – to encourage someone to either change or replicate a behavior. Unfortunately, most of the ‘information’ we give is too vague to help people do either.

When you give coach or give feedback, you serve as someone’s GPS. Like the GPS on your phone, you need to be so specific the person knows precisely what to change or replicate. If you were driving and your GPS said, “Good job” or “I think you’re off track,” you’d throw the GPS out the window and get a map.

If you give someone what you consider feedback and he says, “I don’t know what you mean, can I have an example?” you’ll know you weren’t helpful.

Giving feedback tip one:  Write down what you plan to say, then strip out half the words. Shorter feedback with fewer words is better.

Giving feedback tip two: Practice what you plan to say out loud. Have you noticed that what you ‘practice’ in your head is typically not what comes out of your mouth?

Giving feedback tip three:  Before having the ‘real’ conversations, give the feedback to an independent, third party and ask her to tell you what she heard. Ensure who you talk with will maintain confidentiality. Your organization doesn’t need more gossip.

Giving feedback tip four: Tell someone else about the conversation you need to have, and ask him what he would say. Anyone not emotionally involved in the situation will do a better job than you will. Again, ensure confidentiality.

Giving feedback tip five: Ask the feedback recipient what he heard you say. Asking, “Does that make sense?” is an ineffective question. “Do you have any questions?” isn’t any better.

Giving feedback tip six: Give one to three examples of what the person did or didn’t do, during the conversation. If you don’t have an example, you’re not ready to provide feedback, and anything you say will evoke defensiveness rather than behavior change.

Giving feedback doesn’t have to be so hard. Be so specific that your feedback could be used as driving directions. The purpose of feedback is to be helpful.

One Response to “Giving Feedback – Be Specific”