Manage Up to Give Feedback 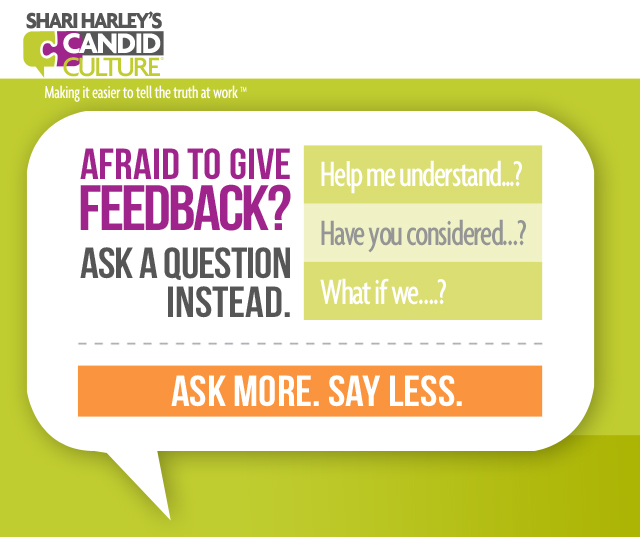 inclined to give those leaders negative feedback. The most senior people in an organization get the least information of anyone.

No one likes to be told that he is wrong. Negative feedback tells the person he did something wrong. But there is more than one way to give feedback. Asking questions can be equally as effective as giving direct feedback.

If you want to give a senior person negative feedback, but you’re afraid of the consequences, manage up by asking more and saying less..

Here are some ways to manage up by asking questions:

Rather than saying, “I disagree, I think you’re wrong, or this is a mistake,” consider managing up by asking questions like:

Asking questions gets the person involved in a discussion, during which you can eventually express your point of view. When you ask questions, you say very little, and definitely don’t call the person’s decision-making into question.

If you do choose to ask questions, watch your tone. If you can safely add the words “you dummy” to a question, you aren’t really asking a question, you’re giving feedback, which is likely to evoke the defensive response you’re seeking to avoid.

It’s important to be able to express your point-of-view at work. Staying in a job or organization in which you can’t speak up, doesn’t feel great and doesn’t leverage the best of what you have to offer. But if you’re concerned about giving direct feedback, manage up by asking questions.  Say less. Ask more.