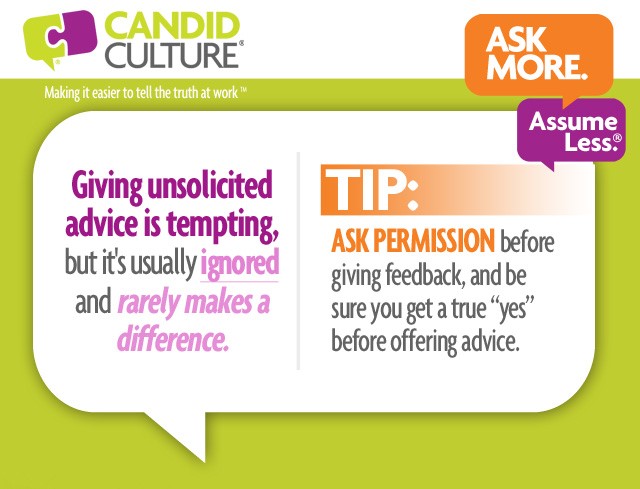 It’s hard to watch people do things that damage them – personally or professionally. And yet, if they haven’t asked for feedback, people likely won’t listen to unsolicited advice, so don’t bother giving it.

If you really want to give unsolicited advice, ask for permission and make sure you get a true “yes” before speaking up.

“I noticed we’re getting behind on the XYZ project. I have a couple of ideas about what we can do. Would you be interested in talking about them?” Or, “That Monday meeting is rough. I feel for you. I used to run meetings like that. Would you be interested in talking about some meeting management strategies? I’d be happy to share what I’ve learned.”

After you offer to talk (aka, give your opinion), listen and watch the response you get. Do the person’s words and body language portray a true “yes, I’d like your opinion” or what seems like an “I know I’m supposed to say yes, but I’m really not interested” reply? If you get the latter, you’re likely just giving unwanted advice that won’t be heard. If that’s the case, let it go. But if the person appears generally interested and open, proceed.

“Last week we were talking about your frustrations about not being promoted. I have a couple of ideas about that. Do you want to talk about them? Either way is fine, but I thought I’d offer.”

If you extend the invitation to talk, the other person has to be able to say no. An invitation is only an invitation if “no” is an acceptable answer. You can’t ask if the person wants your input and then keep talking if he verbally or physically said no.

Be brave. If you care about someone personally or professionally and you see him doing something that gets in the way of his success, ask permission to say something. If you get the go ahead, proceed. If you get a “no thank you,” accept that and move on. You’ve done your part.