Posts Tagged ‘get the words’

You interviewed for a job four weeks ago but haven’t heard back from the recruiter. You asked a coworker to have lunch, no reply. You asked a team member for a document, but after three emails, two texts messages, and a voicemail, still no reply.

It’s normal and natural to go to a dark place when we don’t get a response we’re expecting. We wonder, “Maybe they don’t like me? Perhaps they don’t want me involved in the project? Did I step on their toes? Maybe I asked in the wrong way?”

Wondering why we haven’t heard from people and inventing reasons for the lack of communication is normal and natural. It’s also exhausting and draining.

I’ll admit, I am on pins and needles after I deliver a training program, until I connect with my client to hear how they felt about the program. Even when I know I did a great job, I need to get the feedback and I’m on edge until I get it.

I’ve had enough training on communication and interpersonal relationships to know that others’ responses are usually not personal. People are busy taking care of themselves, as they should. They’re thinking about their own deadlines, deliverables, and the demands on their own time. Ninety-nine percent of the time they’re not thinking about us.

People are wired for self-preservation, and this very good and important. If you don’t take care of yourself, who will? The question, is how do we get our own needs met when we don’t get the response we’re expecting or the communication we need? 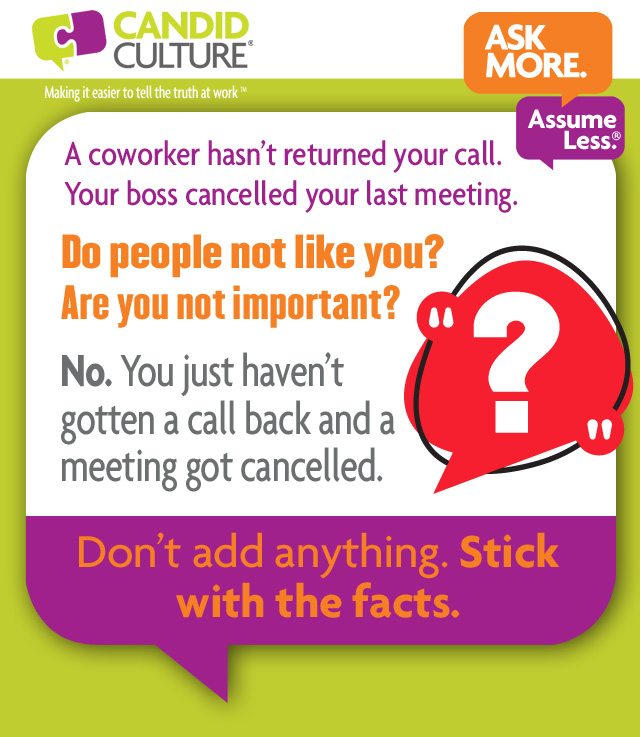 The most powerful approach is to remember that people’s response or lack thereof has nothing to do with us, and to let it go. Don’t be consumed with the lack of communication. Move on. You’ll hear back from the person when you hear back. This would be a powerful position to take, and it’s very difficult, at least for me.

The next approach could be to make up an interpretation that empowers you. You’re going to invent a reason you haven’t heard from the person, you might as well invent a reason that makes you feel good. For example, “The person participated in an escape room this past week and hasn’t made it out yet. They don’t have an Apple watch and have no way to communicate.”

Another approach is to set expectations when you begin working with people. Ask the recruiter, “If I haven’t heard back from you and a few weeks have passed, is it ok if I call to check in?” Ask your boss, “Is it ok if I reschedule meetings that get cancelled?” Ask your coworkers, “If I need information but haven’t heard back after three attempts, what should I do? Who else can I ask rather than wait?” Having a plan in place when you don’t get the communication you need will give you a clear course of action, rather than guessing.

But ultimately the most powerful – even if it’s the most difficult – response is to know deep down that the lack of communication is not about us.