Working with Difficult People – When to Give Up

Unless you never interact with other people, there’s probably someone in your life who repeatedly engages in a behavior that annoys you. You’ve probably made requests about what you’d like the person to do differently, and hopefully you’ve given feedback. But the behavior hasn’t changed.

At some point, we have to accept that people are who and how they are. People can and will change certain behaviors, if their motivation is high enough. But other behaviors won’t change, and if you want to have the person in your personal or professional life, you have to accept the behavior and the person as they are. Accepting frustrating behaviors can be very difficult, at least it is for me. I admit, I often have this conversation myself, “Why won’t he…? I don’t get it. It’s not that hard. How many times do I have to ask?” 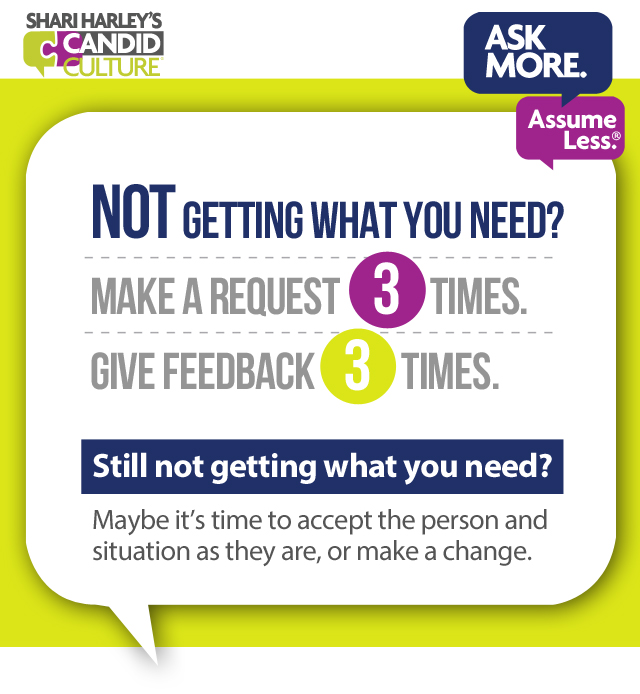 Here are five strategies for working with difficult people:

Working with difficult people strategy one: Decide on the behaviors you absolutely must have from others. We want certain things. We need other things. Get clear on what you need.

Working with difficult people strategy two: Make a request and ask the person to do what you want. It’s always easier to make a request than to offer negative feedback. Be sure you are being explicitly clear in your request. For example, “Please include me in meetings” is too vague. Instead, try, “Please invite me to all client meetings so I can stay connected to the clients and projects.”

Working with difficult people strategy three: Make requests at least three times. With each successive request (nicely) remind the person that you’ve made this request in the past and it still isn’t happening. For example, “We’ve talked about this in the past. Help me understand what’s happening.”

Working with difficult people strategy four: If you’ve made a request at least three times, give feedback as to what isn’t happening and why that causes challenges. For example, “We’ve talked about inviting me to client meetings a few times. It’s still not happening. I’m getting calls from clients with questions I can’t answer because I’m not included in the meetings. Can you help me understand why I’m not being invited to meetings?” Read chapters nine through eleven and chapter thirteen of How to Say Anything to Anyone to get more examples of how to give clear and specific feedback.

Working with difficult people strategy five: Know when to give up and accept the person and behavior as they are. If you’ve made a request and have given feedback three times, you likely aren’t going to get what you want. The person either can’t do what you’re asking or doesn’t want to. Now you have a decision to make.

Strategy five is really the crux of this blog. Knowing when to stop expecting something and coming to peace with that decision will give you great freedom. In order to let go of the expectation you have to decide that it’s really ok for you not to get what you want. Ask yourself, “Can I live with this behavior as it is?” If you can’t, you have a hard decision to make. If you can, then stop expecting and asking for the behavior. You’ll feel better.

Most of the feedback we give and receive puts people on the defensive. We don’t do this intentionally. It just happens. We say how we feel, usually when we’re upset, and the other person responds.

Most of the feedback we give and receive is judgy, like the examples below.

Becoming defensive when receiving feedback is a hard-wired response, like slamming on your brakes when the car in front of your does the same. The more people feel judged, the more defensive they become. If you want to be sure people become defensive when you give feedback, be vague. If you want people to be able to hear you and take action on your feedback, strip out the opinion (judgment) and give people just the facts.

Referring to the chart above, the sentences on the left are opinions. And opinions can be debated.  The sentences on the right are facts. Facts are harder to debate. When giving feedback give just the facts, not your opinion. This will take practice.

The first thing out of our mouths will invariably be judgment/opinion.  People who have participated in feedback training with me or who have read How to Say Anything to Anyone know I call the tendency to be vague Cap’n Crunch.  Cap’n Crunch:  “You’re doing a good job.” That’s sweet but useless.

When someone upsets you and you want to tell the person, prepare for the conversation by asking yourself these questions:

Then practice giving feedback to someone outside of your workplace or group of friends (to reduce gossip and drama) and ask the person with whom you’re practicing what s/he heard.  If your feedback is specific and clear, any lay person will interpret the feedback as you intended it.

Giving feedback, that others can hear, isn’t easy to do. It requires you to put your emotions aside, strip out judgments and opinions, and tell the other person the facts of what happened. The more you focus on the facts and less on how you feel about what happened, the better your conversations and relationships will go.