Don’t Over Communicate – Less Is More

I wrote a repair person, who worked in my house, a two-page, single spaced list of all the things that needed addressing. Then I followed up with seven text messages. I don’t want people to have to guess what they have to do. I want to be thorough. It feels like the right and helpful thing to do.

The problem? The repair person didn’t read my list. It was too long. I would have been better off saving my time and saying nothing if he wasn’t going to read the list anyway.

When people send me an email with five paragraphs, my eyes glaze over. I close the email promising to read it later, but don’t until the sender asks if I received their email. People are busy and have to choose where to invest time. When it comes to communication, often, less is more. The question is, how to be succinct and still be thorough? How do you make sure people know what’s expected without providing so much information that nothing gets read?

I’m going to admit, I struggle with this. 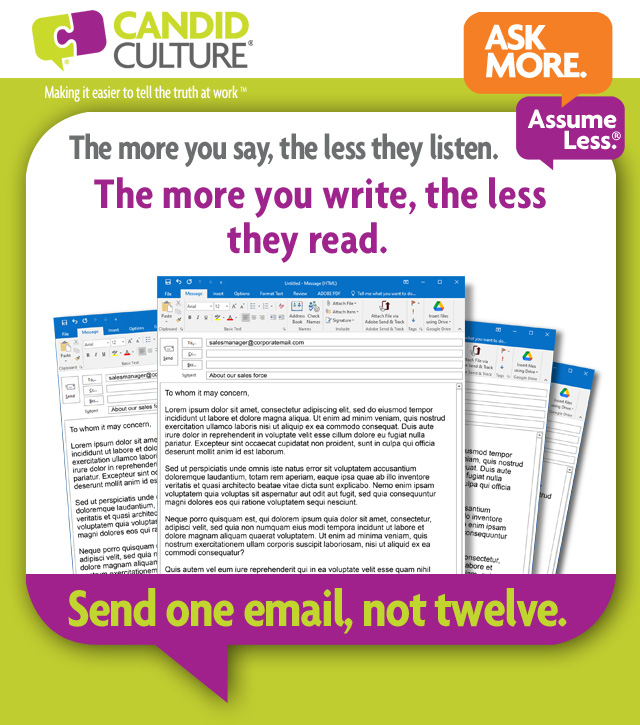 I’ve decided to create some communication rules for myself. I’m hoping they’ll be helpful to you as well.

I suspect that providing the right amount of detail will be something I’ll struggle with forever. The key take aways are this:

People often don’t read long communications. If you can say it in fewer words, do so. Shorter is better. Be complete, but don’t go overboard. Make sure things are said only one time. If you’re not sure someone read or understood what you said or wrote, ask them what they heard or read. Don’t ask, “Do you have any questions?” Or “Does that make sense?” Both are waste-of-time, non-questions.

When in doubt, less is more.

Why Not Be Awesome?

A few weeks ago a fellow business owner told me about one of his employees whose performance had dropped. The work she was producing was acceptable but not as good she had done in the past and not as good as he knew she was capable of doing. So he asked her to rate her performance.

He asked his employee, “If you had to rate the level of work you’re producing, how engaged you are in your job, and how committed you are to the company, how would you rate yourself?” The employee thought about her manager’s question and replied with a score of 65%. He asked why she wasn’t giving the job 100% of her effort and ability.  She said she didn’t know.

We all have times when we coast and do our minimal best. Sometimes we’re tired and need a break, or don’t like the type of work we’re doing, or don’t like the people we’re working for or with. Those are typical reasons for producing so-so work or having a moderate level of commitment to a company or job.

But sometimes none of those things are at play. We’ve just become complacent.

Evaluate where you are today in your level of commitment to and interest in your job. What score would you give yourself? If you’re not giving 100%, why not?

If you rated yourself below 100% ask yourself these questions:

If your performance and level of commitment is less than you know you’re capable of doing, and your performance level is related to the questions above, have a conversation with someone in your organization who can help you do something about those things. Things won’t get better without your intervention.

If you’re not sure how to ask for more or different work, read my new book How to Say Anything to Anyone and get the language you need to have this conversation. The book won’t be in bookstores or available on Amazon until January, but we have some advanced copies for our clients.

If there are no issues to address, ask yourself if you’ve just gotten complacent. Have you gotten into the habit of coasting and delivering work that’s not at the level you’re capable of doing, for no particular reason? If that’s the case, recommit to checking back in and raising your performance –just because you can.

Why not be awesome?