Waited Too Long to Give Feedback?

It’s not unusual to wait too long to give feedback. Giving feedback often feels awkward and uncomfortable. What happens if the person cries, or gives us the cold shoulder, or worse, quits?

Working virtually over the past few years has exacerbated the waiting. Many managers who were accustomed to giving feedback in person hesitated to have hard conversations over the phone or via video.

Perhaps you waited so long to give feedback, you feel like you can’t.

It’s never too late. You just need to set the expectation that you’re going to give feedback and why. 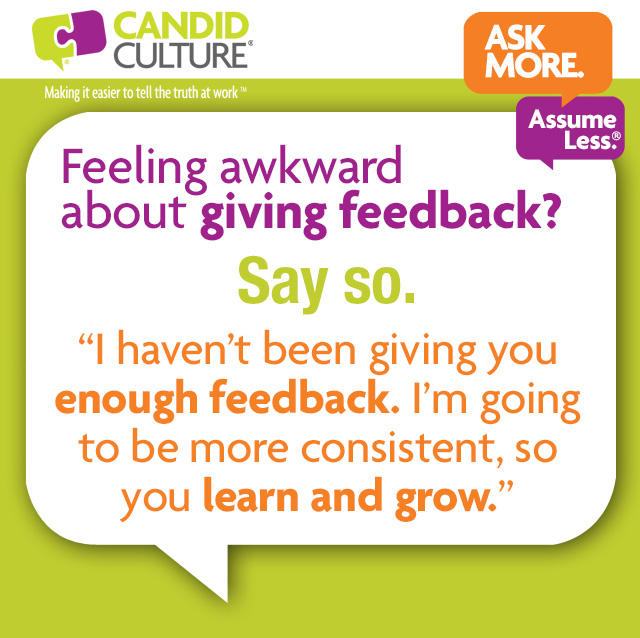 One of the keys to being (more) comfortable giving feedback is to know that most people genuinely want to know how they’re doing. Working in the dark is frustrating. Not knowing the behaviors that impact us and our opportunities is also frustrating. Working on a project for months only to find out the work we did wasn’t what the other person wanted is ultimately frustrating.

Most people genuinely want feedback. They may struggle to hear feedback, they may get defensive, they may not take responsibility, but it doesn’t mean they don’t want to know.

If you want to give feedback but feel like you waited too long, say so. The conversation could sound like this:

Manager to direct report: “I realized that I haven’t been giving you enough feedback. I’d like to start doing a semi-monthly debrief, not because anything is wrong or has changed. I want you to learn and grow as a result of working with me, and you won’t if I’m not providing regular feedback”

Peer to peer: “I need to talk with you about something and I’ve realized that I’ve waited too long. As a result, I’m feeling awkward and hesitant. Is it ok if I speak freely?”

Too Much Candor? When to Give Feedback and When to Say Nothing. 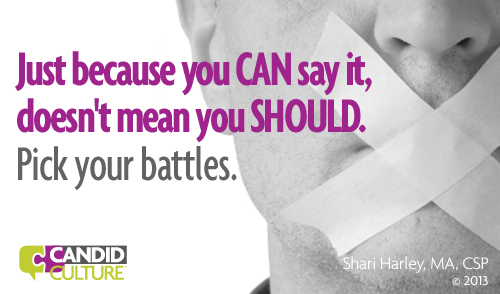 I’m frequently asked the question, “Is there such a thing as too much candor?” Clients ask this question when an employee or coworker is telling anyone who will listen exactly what she thinks of just about everything. Incidents like these make managers and leaders hesitant to ask employees for feedback, not knowing how to turn off the well.

Yes, there can be too much candor. The truth is one ingredient in the recipe; it’s not the whole meal.

A few guidelines of when to give feedback:

1. You have a relationship with the feedback recipient, and he will be able to hear you without becoming overly defensive.

2. You’ve been asked for your opinion.

3. You feel very strongly about an impending decision that has not yet been made.

When not to give feedback:

1. The feedback recipient can’t change what you’re concerned about.

2. You don’t have a relationship with the feedback recipient and thus your message is likely to go on deaf ears.

3. You have not been asked for your opinion.

4. A decision has been made and at that point you’d just be talking to talk.

When managers ask me, “Is there such a thing as too much candor,” I suspect what they’re really asking me is, “How do I get my employees to be more discerning with the feedback they share, to whom, and how.”

Here are a few ways to guide employees who over communicate:

1. When you ask for feedback, tell people specifically on what you want feedback, in what format, and during what time horizon.

For example, tell employees, “We are looking for feedback on the new time-off policy. We’ll be asking for input at Friday’s town hall meeting. Please come to the meeting and share your thoughts. This will be the only opportunity to provide input.”

2. Tell employees who have a tendency to overwhelm with feedback or violate some of the guidelines listed above, “Your input is valuable. The more feedback you give, the harder it is to discern what’s important. Pick your battles. Give feedback on the things you feel really strongly about, and perhaps save other feedback for future opportunities.”
3. Tell employees who have a tendency to insult people with critical feedback, “How you deliver feedback influences whether or not people can hear your feedback and take action. No one likes to be told that she is wrong. Be careful not to attack people. Focus on the problem, not the person. Ask questions and make requests versus telling someone why what she is doing is wrong. Then, of course, tell the person to read chapters nine through twelve of my book How to Say Anything to Anyone.

Just because you can say something, doesn’t mean you should. None of us wants to damage relationships by insulting people or be labeled as a complainer. Pick your battles. Give feedback when you feel really strongly, a final decision has not been made, and you have a relationship with the recipient. And if you find yourself talking to talk, stop.