Instead of spending 60-90 minutes doing multiple interviews, which tell you little, give candidates a chance to experience the job, and see how they do.

I used to conduct thorough interviews after screening candidates via phone. I’d ask a lot of questions, and I still hired the wrong people. And as a result, we’ve changed our hiring practices at Candid Culture. We no longer do traditional interviews after phone screens. Instead, after conducting a phone screen, we give candidates about an hour to do parts of the job. Then we decide if we want to talk with them further. 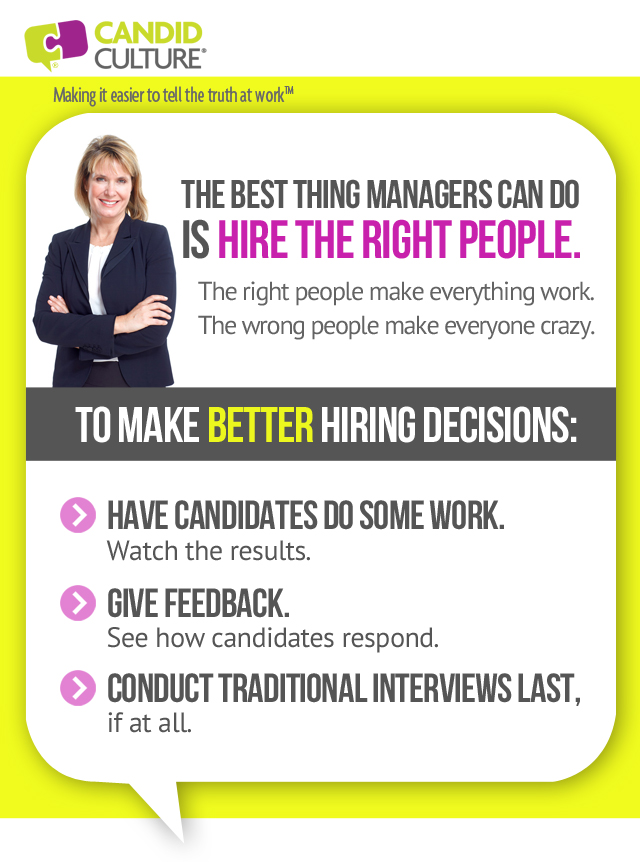 Interviewing Techniques Number One:  Consider hiring a recruiting firm to source and screen candidates. Reading 100 resumes is likely not how you want to spend your time.

Interviewing Techniques Number Two:  If you choose not to outsource recruiting, create a few steps for candidates to follow when applying for a job with your company to weed out the people who aren’t serious.  It’s better to see 20 resumes from serious candidates than 100 resumes from candidates who potentially aren’t really interested in your company.

Interviewing Techniques Number Three:  If you’re sourcing and screening your own candidates, conduct thorough phone screens. Assess culture fit and candidates’ ability to do the job, and eliminate candidates who don’t meet your criteria.

Interviewing Techniques Number Four:  After conducting phone screens, schedule interviews with the candidates you’re interested in. Tell candidates they’ll be participating in a practical interview during which they’ll get to do parts of the job, so they can see if they’ll enjoy the work.

Interviewing Techniques Number Five:  Have candidates do some work, observe them and/or the work they produce, and provide some positive and improvement feedback. If, after observing candidates do some work, you think they can do the job, and the candidate accepted your feedback without becoming defensive, conduct an in-person interview. If you don’t think they can do the job or were not open to feedback, eliminate the candidate.

During interviews, I screen for a candidate’s willingness to accept coaching and feedback. People who aren’t coachable or open to feedback are exhausting and difficult to work with.

Interviewing Techniques Number Six:  If you’re interested in a candidate after both the practical and in-person, video or phone interview, conduct detailed reference checks. Never, ever skip the reference check.

Interviewing Techniques Number Seven:  Lastly, if you’re going to extend an offer, ask your finalists to spend a day or half a day job shadowing. Job shadowing virtually is trickier than in person, but with some creativity, it can be done. Candidates and employers are on their best behavior during an interview and become more relaxed outside of the traditional interview. You want candidates to get a feeling for what it’s really like to work in your organization. Culture fit is the hardest thing for candidates and hiring managers to predict. Job shadowing helps.

Slow down your interviewing, be more thorough, and make better hiring decisions.