Most of the feedback people receive in the workplace isn’t feedback at all.  It’s what I fondly refer to as Cap’n Crunch – vague and unhelpful words that make people defensive but don’t change behavior. If you want the people you work with to do some differently, give specific feedback.

Most of the fake feedback people get sounds like this: 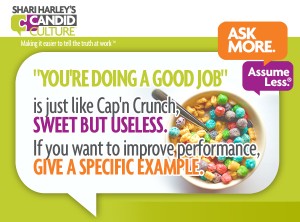 “You did a great job on that.”

“You’re difficult to work with.”

None of this is feedback. It’s all Cap’n Crunch. Vague, vague, and more vague.

The first words out of your mouth will invariably be Cap’n Crunch. Follow those words with, “for example” and you’ll be headed in the right direction.

“You did a great job on that. For example, I never had to ask about the status of the project. You gave me an update every Friday, and that made me feel comfortable that we were on track.”

You dressed inappropriately for that meeting. For example, the client was dressed in business casual and you were jeans and tennis shoes. Next time, please dress as the client dresses or a step above in khaki pants or slacks, a button down shirt, and a jacket.”

If employees shop your feedback around, asking what others think of the feedback, it’s because you were vague, they disagree with you or they’re being defensive. Feedback will be received better and resisted less if you’re specific.

Specific feedback can be captured on video. Meaning, you can video someone walking into a meeting late, rolling his eyes, and texting on his phone. I dare you to video “you were disrespectful in the meeting, you dressed inappropriately, or you’re difficult to work with.”  If you can’t capture the feedback on video, you don’t yet have specific feedback. You have Cap’n Crunch.

When I teach managers to give feedback I ask the managers to, “Describe the situation to me. What did the person do? Managers often reply with, “He was negative.” This is Cap’n Crunch. So I keep asking questions. “What did he do that was negative? What did it look like?” After two or three questions the manager tells me, “I overheard him complaining to other employees in his cube about the decisions the company is making. I’d rather he ask me questions about the direction we’re going versus gossip to his peers.” Now we have specific feedback.

Most of us dread giving and receiving performance reviews. Last week, this week and next week’s blogs are designed to make the performance appraisal process easier. If you want more help, chapters nine through twelve of How to Say Anything to Anyone provide a clear and easy-to-follow formula for giving specific feedback.

I’ll be back next week with more tips on giving feedback that actually changes behavior. Until then, BE SPECIFIC. If you’re not using the words “for example” you’re not giving specific feedback.