Posts Tagged ‘the time to talk is now’

People have a tendency to talk about us, not to us. If you haven’t been gossiped about, you just need to meet more people.

If you have something to say, say it directly to the person involved. If you’re not going to speak to the person directly, say nothing at all. As we all know, this is easier said than done. Gossip will destroy relationships, organizational cultures, and careers faster than anything else. And we are all tempted to gossip.

Most of us consider gossip to be saying something bad about someone else when that person isn’t there. But what if we say something good?

Several years ago, I took a year-long class with about eighty other people. The class met one weekend a quarter over twelve months and had a few ground rules, one of which was no gossip. Participants couldn’t gossip anywhere, at any time, during the class’s entire duration. No gossip with friends, family, or coworkers for a year.

When the class started, I assumed the no-gossip guideline would be no problem for me. Then I started to notice my behavior. At the time, I was a director in my organization and had one friend at work who was my typical confidant. Most of us have “our person” at work—someone we confide in and complain to. The two of us would sit in my office with the door closed, talking about all the bad decisions the leaders of our company had made. The moment I began paying attention to the no-gossiping rule, I realized that not only did I gossip, but I was good at it and even enjoyed it. (Oh, come on, admit it—it’s fun.)

The problem is that gossiping breaks trust. If a coworker gossips with you about someone else, he will talk about you to someone else. You are not special or different. (Well, you are, but you know what I mean.) You are not exempt. 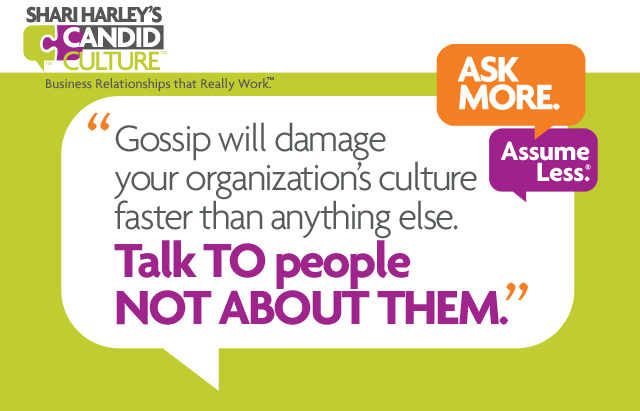 People will never stop gossiping. It’s one of those human things. We all do it, and we aren’t going to quit. The best we can hope for is to reduce the amount of time we spend talking about other people behind their backs.

** This blog is an excerpt from the book How to Say Anything to Anyone.

Thanksgiving is coming up. Many people will spend time with family and friends they haven’t seen in a long time. Some people will be indoors with a larger group than they’ve seen in almost two years. And many people are anxious about that. 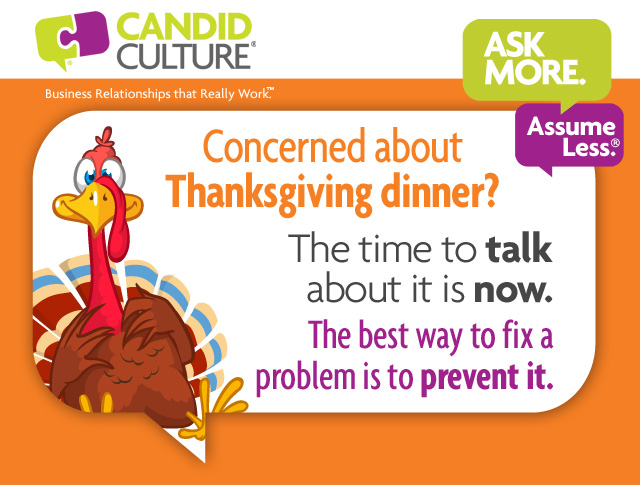 How many people do you feel comfortable being in the same room and house with? Do all attendees need to be vaccinated? Do you want assigned seating so people sit with people they see regularly? Do you want people to take Covid tests before attending an event? You can likely have whatever you’re willing to ask for. But you likely won’t get what you don’t ask for.

You may be concerned that your requests are too much and thus you’re hesitant to make those requests. If you’re afraid to ask for something, feeling like it’s just too big of an ask, say that. Saying how you feel has a lot of power and is disarming. It could sound something like, “I’m feeling nervous about Thanksgiving dinner. I’ve been hesitant to say anything because I don’t want to offend you. Is it ok if I ask a few questions?”

“I haven’t been in the same room as a group of people I don’t know well in a long time. How many people are coming? What requests are you making of guests from a health and safety perspective? Are you comfortable asking that everyone be vaccinated and take a rapid Covid test before arriving?”

Sprinkle your questions into the conversation. Ask for what you really need. Asking these questions of the host before the dinner is a lot less confrontational than telling a guest they’re sitting too close to you and asking if they’re vaccinated. Thinking through your needs and making requests before an event is always easier than trying to change a situation. The best way to prevent an uncomfortable situation is to talk about it before it happens.