Posted under Uncategorized on May 15, 2022 by Shari Harley.  6 Comments

It’s hard to believe that it’s been 15 years since I left my corporate job to launch a not-yet-fully-formed business.

People ask me regularly, “Who do you typically work with?” Even after 15 years, the answer still surprises me. Our clients are incredibly diverse. Candid Culture clients range from small family-owned businesses to school districts, towns and cities, associations, universities, hospitals, not-for-profits, and huge, global corporations. The things all of these organizations have in common – the organizations’ leaders want to create a work environment in which employees can speak freely without fear. They want to create a place where people genuinely want to work and can do their best work.

So, what are a few things I have learned these past 15 years? 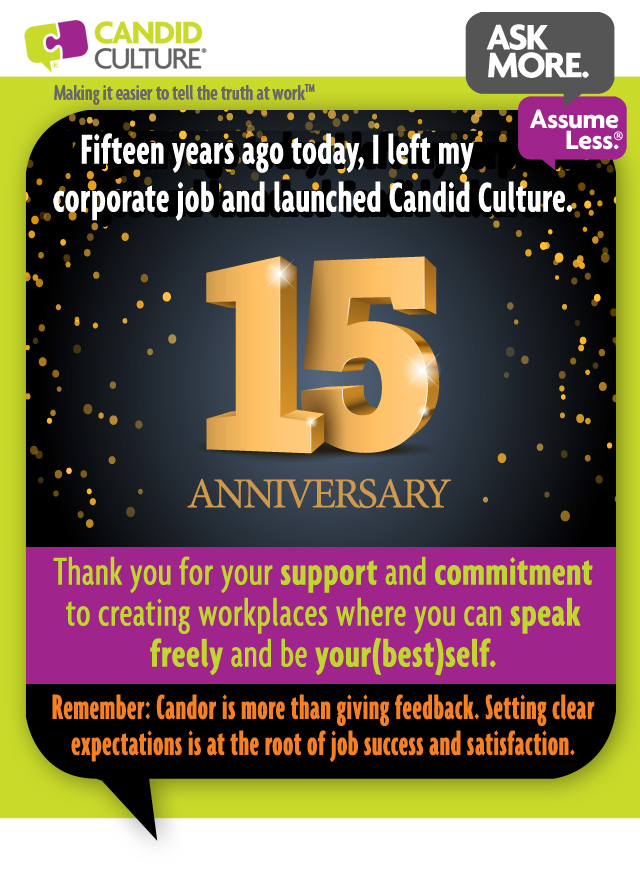 I’ve learned that almost-worldwide people are afraid to say what they really want to at work (and in life). Almost universally, people feel like they will be disliked and disapproved of for providing feedback others don’t like.

When I started Candid Culture, it was with the premise that it’s hard to speak up in most relationships because we haven’t set the expectation that it’s ok to do so. We haven’t laid the groundwork, letting people know we genuinely want their input and there won’t be a negative consequence for saying unpopular things. My views on this haven’t changed. If you’ve read How to Say Anything to Anyone you know that the book’s title makes it seem like the book is about feedback, but it really isn’t. The first eight chapters are how to create environments and relationships in which it’s safe to speak up.

I’ve learned to let people save face. Negative feedback is hard to hear, it bruises the ego. Say just enough to get the desired actions. Give small amounts of feedback at a time, saying just what you need to. And never give feedback when you’re upset. The time to fix a problem or a relationship is when nothing is wrong, aka, no one is upset.

I’ve learned that people really are doing the best they can. If they knew another way, they would do it that way. But that doesn’t mean a person’s approach is good enough (for me). I can request more from a person or walk away from a relationship and still grant the other person grace.

I’ve learned it’s ok to renegotiate. “I know I said I would do this, but I’m realizing I can’t in our agreed time frame. Here’s what I can do.” Being upfront is scary in the moment but feels better than silently disappointing people.

The last thing I’ll say is that I’m still working on and will probably forever be working on feeling ok making requests. I tell myself regularly, it’s ok to ask for help, to ask for what I need, and to ask for a change. Asking will always be easier than giving negative feedback. And it’s ok to ask.

What do I hope for in the next 15 years? I wish us all the courage to ask for what we need and know that we deserve to have those things.