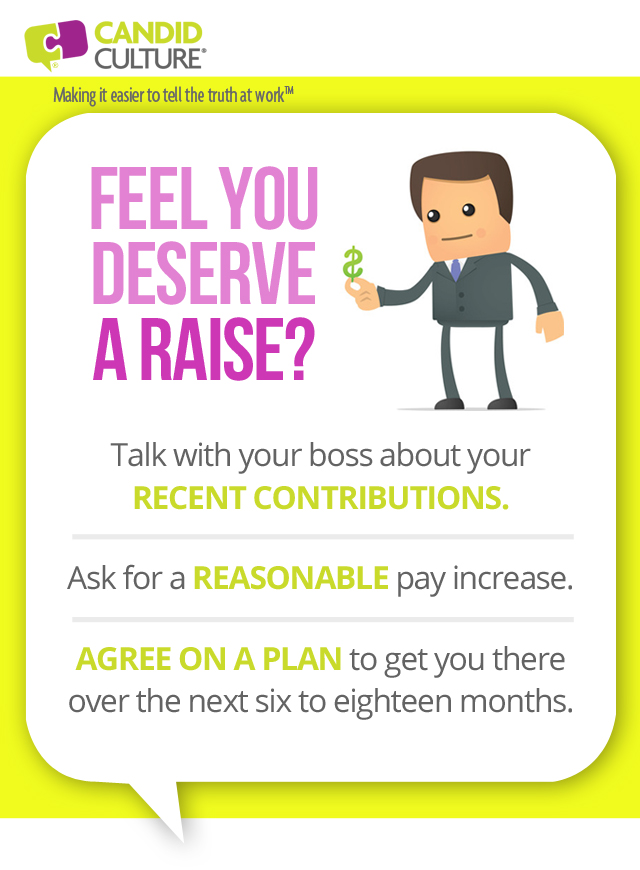 How to ask for a raise step two: Find out what your job pays on the open market. Jobs are assigned a value and a pay zone that is often transferable across industries. For example, if an entry level accountant at a big four accounting firm is earning $60,000, the pay zone is likely $50,000 – $70,000. If said employee asks for $64,000, that’s realistic. If they ask for $85,000, they’ll be seen as out to lunch. If an employee wants to earn $85,000, with their current level of education and experience, they’ll have to switch careers.

How to ask for a raise step three:  Learn your company’s philosophy on compensation. Companies often deliberately decide to pay in the top, middle, or lower part of pay zones. For example, if an industry like sports or entertainment is glamorous and lots of people want to work in that industry, jobs are likely to pay less. Perhaps a company has great perks and benefits, and in exchange, pays less. Alternatively, some companies want to be known as providing the highest compensation and will pay for it. Knowing where your company falls on the compensation spectrum will help you determine a realistic number to ask for. Your Human Resources representative can answer these questions.

How to ask for a raise step seven:  Discover who needs to support your pay increase. Your boss may not have the ability or authority to give you an increase. Subtly ask what they can do. That could sound something like, “Who needs to participate in the decision to grant me a pay increase? Is there anything I can do to assist with sharing my accomplishments or making the case for an increase?”