Coming to work in costume on Halloween?  Whatever you wear to work is likely to be captured by someone’s phone and shared . . . widely.

None of these are work appropriate Halloween costumes:

This reminds me of a participant I had in a public speaking class several years ago. While doing a presentation, in class, he told a story about being ten years old and playing outside in his neighborhood when he realized he needed to go to the bathroom. He raced home, but didn’t make it. He ended up going to the bathroom outside, next to his house. After that class, every time I saw the guy in the hallway at work, I had the image of him pooping next to his house and years later the image remains with me.

Telling that story was a bad call. It created a 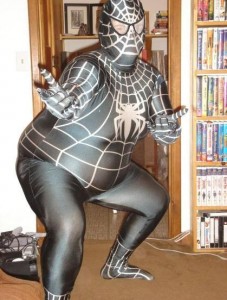 long-lasting impression I doubt he wanted his co-workers to have.

Impressions are made more quickly than they are forgotten. Have fun on Halloween, just not too much fun. If you wouldn’t want to see a photo of you in costume hanging in your organization’s lobby or on your website, don’t wear it to work.