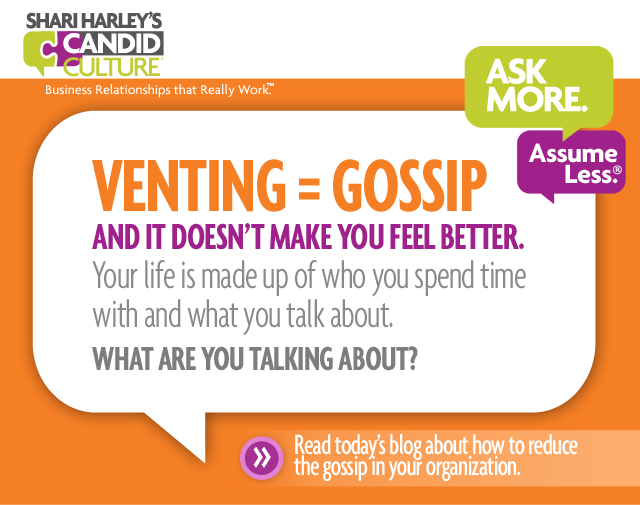 I had a colleague at my last job who was a peer and a friend. We were at a similar level and would periodically sit in one of our offices, with the door closed, talking about the bad decisions our company’s senior leaders made. One day I realized that these conversations were exhausting to me. They were negative and didn’t make me feel better. In fact, they made me feel worse.

Some people distinguish between gossip and venting, asserting that venting is cathartic and makes people feel better. It doesn’t.

I’ll use an analogy I read in one of Deepak Chopra’s books. When you put a plant in the closet and don’t give it light or water, it withers and dies. When you put a plant in the sunlight and water it, it grows. And the same is true for people. Whatever you give attention will proliferate. Whatever you deprive attention will go away.

Your life is made up of the people you spend time with and what you talk about. What are you talking about?

In addition to draining you of energy and ensuring you focus on the things that frustrate you, gossip in the workplace kills the organization’s culture. If employees can’t trust that their peers won’t talk about them when they’re not there, there is no trust in the organization. And you can’t have real relationships without trust.

Gossip isn’t going anywhere. It’s a human phenomenon and is here to stay. But you can reduce gossip.

A few ways to reduce the gossip in the workplace:

“I’ve been hearing a lot of gossip, which is not good for our culture.”

“We want people talking directly to each other, rather than about each other. As a result, we’re putting a no gossip policy in place.”

“Every time you hear gossip, wave two fingers in the air.” This will draw attention to the gossip in the workplace without calling anyone out.

Also, ask your peers and friends not to gossip with you. End conversations that contain gossip. This will be hard to do, but if everyone does it, it will become much easier.

“Every time we hear gossip in the workplace, the gossiper owes a dollar. Every quarter the gossipers will buy the office lunch from the gossip jar.”

The keys to reducing gossip in your office are to draw attention to the gossip, have a consequence for gossiping, and over communicate so your employees don’t have to make stuff up. Employees want to know what’s happening in the organization. In the absence of knowledge, people make stuff up, and it’s never good.

Venting and gossip are the same. Unless you’re planning a conversation with a coworker or friend to address a challenge or problem, you’re gossiping. And talking about what frustrates you will only make you more frustrated.