Taking Credit For Others’ Work – Here’s What to Do 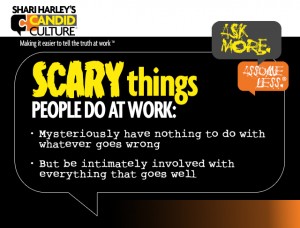 Taking credit for others’ work is not unusual or mysteriously having nothing to do with things that go wrong. It happens, sometimes purposefully, sometimes not. The key is what we do when things like this happen.

I’m going to suggest that you use the lowest level of intervention possible to resolve challenges. Give feedback while allowing people to save face. Don’t back people into a corner from which neither they nor your relationship can recover.

When your coworker is taking credit for others’ work, you could say:

1)  “I noticed that when talking about project X during last week’s department-wide meeting, my name wasn’t mentioned in conjunction with the project. Why is that?”

Or you could say:

2)  “Thanks for highlighting the X project during last week’s department-wide meeting. I’m glad the project got some exposure. I noticed that my name wasn’t mentioned in conjunction with the project. I want people to know they can come to me with questions about this project. In the future, will you tell people that I wrote the plan?”

Some might call option one passive and even a disingenuous. Both methods produce the desired result –the other person knows that you know what happened, and you’ve requested different behavior. One method may incite conflict, one most likely won’t.

Be as direct as your relationship will allow. There are people with whom you can be very direct, without consequence. And there are some relationships that can’t withstand direct feedback.

Most of the people I talk with in organizations believe they can’t give feedback without negative consequences. The only way to know how direct you can be is by trial and error. Give a little feedback, see how it goes. Give some more, see how it goes. You might be surprised at how honest you can be. And when there is backlash for giving direct feedback, next time, give less. Ask a question or make a request instead. Asking questions is another form of feedback. It’s just less direct and thus less confrontational.

We train people to treat us as they treat us. You will get both what you ask for and what you allow.  What are you allowing?

Written by Shari Harley owner and President of Candid Culture a training and development company making it easier to tell the truth at work.