How to Change Your Reputation at Work – Eight Steps 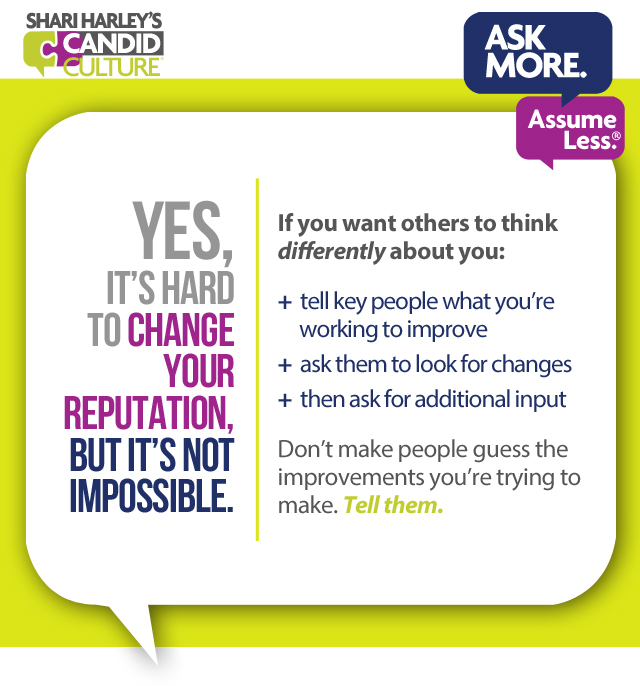 We know impressions are made quickly and are hard to change. But it’s not impossible to repair your reputation. If you want to change how people see you, I’d suggest being very overt about the changes you’ve made. Don’t simply alter your behavior and wait for people to notice. They likely won’t.

Once people have formed an opinion about you, that’s often their opinion for as long as they know you. For example, if you have a tendency to be late, even if you periodically show up on time, your friends and coworkers will think of you as the person who is always late. If you work with someone who tends to miss deadlines, even if she periodically turns work in on time, you’ll think of her as someone who misses deadlines.

Once people make a decision about us, that’s often how they’ll see us for the duration our relationship. So if you want to repair your reputation, you’re going to have to do it overtly. Making changes and hoping people notice, won’t produce the desired result.

Here Are Eight Steps to Repair Your Reputation:

Overtly pointing out the behavior changes you’ve made, asking people who are important to you to pay attention, and give you additional feedback, is key to altering your reputation. Most people working to change their reputation don’t do this. They make behavior changes and hope others notice. If you want to alter your reputation and how others see you, you need to do so overtly. Tell people the changes you’ve made; don’t make them guess. Ask people to observe your behavior, and then ask for more feedback. And no matter how hard the feedback is to hear, don’t get defensive. Becoming defensive will ensure you don’t get feedback the next time you ask.