When my son started pre-school and kindergarten, I went to new parent orientation. At those orientations I sat next to parents who told me their questions about the programs. But they never asked the people running the meeting their questions. They wondered in silence, whispering to seat mates who didn’t know any more than they knew. I’m always flabbergasted by these situations until I remind myself that people don’t like to admit they don’t know something. No one wants to look stupid.

Most of us aren’t eager to admit when we don’t know something, need help, or make a mistake. We fear these things will damage our reputation and make us appear less than to others. But neither are true. It takes strength and self confidence to admit mistakes, accept feedback, and ask for help. Strong, self-confident people do all of these things.

When someone who works for me is willing to admit mistakes, I think more of them. When employees ask for help rather than spin their wheels unnecessarily, I’m appreciative. When they’re open to feedback, I’m grateful they’re easy to work with. And the same is likely true for you. 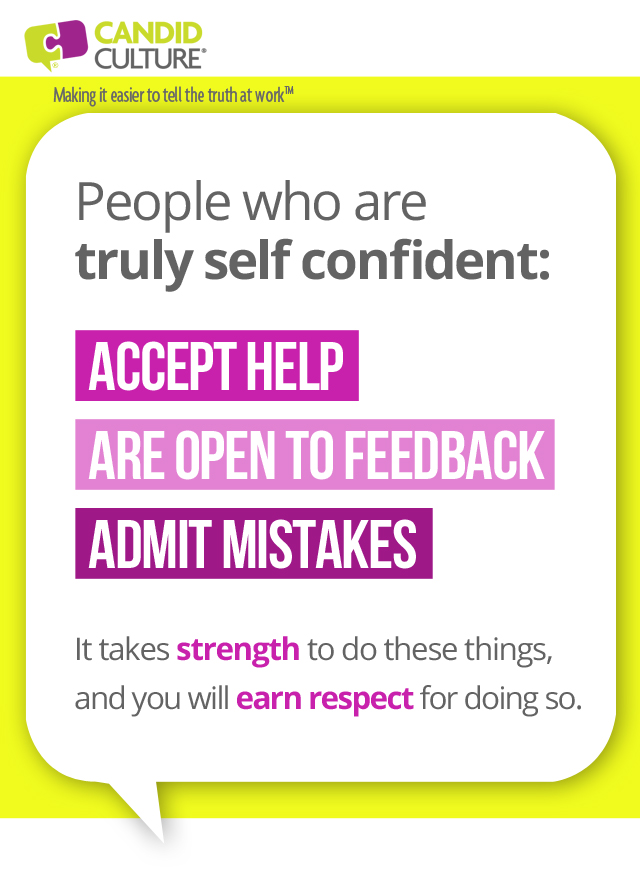 Before launching Candid Culture, I worked with a CEO who frequently lead with, “I may not be the smartest guy in the room, but…” The CEO was trying to appear humble and relatable, but he was the smartest guy in the room and we all knew it, thus his attempts were false and came off as such. Arrogance masquerades as self confidence. People who are arrogant come off as strong and self confident, but it’s a façade.

It may seem like your personal power and reputation will be diminished by admitting mistakes and accepting help. But this couldn’t be further from the truth. It takes strength to say you don’t know how to do something, to embrace feedback that stings, and to admit bad choices. And strong, self-confident people do all of these things, regularly.

You won’t lose credibility or damage your reputation by being humble, instead you’ll be seen as real, relatable, and willing to admit a lack of perfection. And all of those things take strength that ingratiate you to others. So be yourself. Don’t pretend you’re better or more knowledgeable than you are. Authenticity goes a long way.

Admit Mistakes and Advance Your Career

No one likes to make mistakes. We want to do good work and have people think well of us.

The key to maintaining your relationships and reputation, when you make a mistake, is to take responsibility and make things right as soon as possible. Saying something wasn’t your fault or becoming defensive will only damage your reputation and relationships. As counterintuitive as it sounds, you will gain respect and credibility by admitting fault and correcting problems. 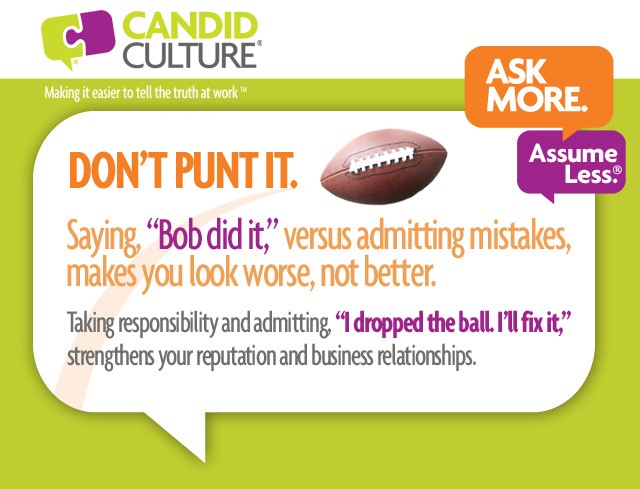 I made a mistake at work. Now what?

“I dropped the ball on that. I apologize. I’ll fix it and let you know when it’s been handled.”

Or, “Thank you for the feedback. This clearly didn’t go as planned. I’ll make those changes and let you know when they’re done.”

“Thanks for letting me know that our process is causing your department challenges. We certainly want the process to be smooth. My team will fix this month’s report, so your team doesn’t have to invest more time. We’ll update the process for next month and walk you through the changes before the report is due.”

Don’t provide a bunch of reasons for breakdowns. No one cares. Telling people why something occurred can sound like excuse management. People just want to know things will be made right.

Asking for feedback, taking responsibility, and telling people how you will correct errors may not be your natural or first reaction. The more you can train yourself to do these things, the easier you will be to work with and the better your reputation and business relationships will be.